The Offer of PEACE

“These things I have spoken to you, that in Me you may have peace. In the world you will have tribulation; but be of good cheer, I have overcome the world.” John 16:33

These words were spoken by Jesus to the Disciples before His Journey to the Cross.

“This statement, spoken as it is in the shadow of the cross, is audacious… He goes to the cross not in fear or in gloom, but as a conqueror.” (Morris)

Jesus offered His disciples peace. He made the offer in the most unlikely circumstances. At that very minute, Judas met with Jesus’ enemies to plot His arrest. Jesus knew that He would be arrested, forsaken, rejected, mocked, humiliated, tortured and executed before the next day was over. We think that the disciples should have comforted Him – yet Jesus had peace, and enough to give to others.

The commentator Morris says, “This promise was especially powerful for those eleven disciples. He predicted their desertion in the very saying in which He assured them of the peace He would give them. He loved them for who they were and despite their shortcomings.”

God Loves Me despite my shortcomings…WOW…That alone brings me a sense of PEACE! Even though this PEACE is given there is a promise of conflict and struggle as well.

The commentator Maclaren states, “He promises a peace which co-exists with tribulation and disturbances, a peace which is realized in and through conflict and struggle.”

When Jesus wanted to comfort and strengthen His disciples, He spoke of His victory, not directly their victory. This wasn’t “cheer up” or “try harder.” Jesus knew that His victory would be theirs.

Jesus proclaimed the truth of His victory. This was an amazing statement from a man about to be arrested, forsaken, rejected, mocked, tortured and executed. Judas, the religious authorities, Pilate, the crowd, the soldiers or even death and the grave could not overcome Him. Instead, Jesus could truly say, “I have overcome the world.” If it was true then, it’s even truer now.

“He overcame the world in three areas: in His life, in His death, and in His resurrection.” (Boice)

“He overcame the world when nobody else had overcome it.” (Spurgeon)

Chuck Smith in his commentary on John 16 says, “Christianity, different from religion, because Christianity is a dynamic, it is the dynamic of the Author who has come to dwell within me to take up residence within my life, and to do in me what I cannot do in and for myself. Through the power of the risen Christ, I have the power to live the life that He has asked me to live.”

Knowing that Jesus has conquered the World and all of it’s woes brings me a sense of PEACE that is JESUS HIMSELF.

“Who shall separate us from the love of Christ? shall tribulation, or distress, or persecution, or famine, or nakedness, or peril, or sword?

As it is written, For thy sake we are killed all the day long; we are accounted as sheep for the slaughter.

Nay, in all these things we are more than conquerors through him that loved us.

For I am persuaded, that neither death, nor life, nor angels, nor principalities, nor powers, nor things present, nor things to come,

Nor height, nor depth, nor any other creature, shall be able to separate us from the love of God, which is in Christ Jesus our Lord.” 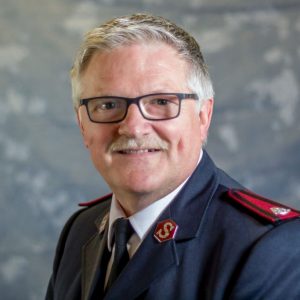 Ken has been involved in Public Relations and Communications and Fund Raising for over 20 years. He has competently worked with the media...TV, Radio and Print...Advertising and the news. He has developed many connections within the Realm of Government Relations and now brings this wealth of information and experience to the role of Senior Pastor to The Salvation Army in Whitby. He loves to discover new insight and to share that insight with others through His role as pastor using his skillset to effectively communicate.

PrevPreviousStop and Smell the Flowers
On Key

The Offer of PEACE

“These things I have spoken to you, that in Me you may have peace. In the world you will have tribulation; but be of good

Stop and Smell the Flowers

A few weeks ago our granddaughter was playing in the backyard.  She was so excited to be visiting that she was flitting from one activity

The sales clerk, the kid on a bicycle, the crossing guard, the man who stands in line for food for his family – all have

More than a Conqueror

How To Move From Simply Surviving – To Being More than a Conqueror Some thoughts on Romans 8:35-39 “Who shall separate us from the love